Marmalade is a preserve made from citrus fruit, especially oranges. It has a long history. The Romans discovered from the Greeks that Quinces cooked over a slow fire with honey would gel when cooled. The word marmalade comes from the greek word for apple.

Henry VIII received a gift of a “box of marmalade.” The letter with it said, “I have sent to your lordship a box of marmaladoo, and another unto my good lady your wife.”

The word “marmalade” first appeared in print in the English language in 1480.

No matter how it came about, marmalade is one of the polarizing foods. Some people love the sweet/bitter contrast. Others hate it. I love it. However, the marmalade that comes in the little tubs in restaurants and the commercial marmalade made by big food factories is a pitiful imitation of the real thing. Real, home-made marmalade is rich and silky with chewy bits of fruit. It explodes on your tongue with flavor. It is to be savored and adored.

Since Seville oranges, the fruit of choice for orange marmalade, are scarce where I live, I decided to try my hand at what I had: Blood Oranges. 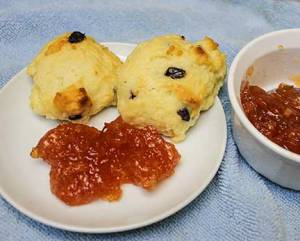 Here is the recipe for marmalade. END_OF_DOCUMENT_TOKEN_TO_BE_REPLACED